Place Massena and the Paillon Promenade in Nice

Place Massena and the Paillon Promenade in Nice

Place Massena is Nice’s main square, and it is from here that it is worth starting your city tour. It is crossed by the Paillon Promenade, which is built over the river. The whole area is a great place to watch the everyday, unhurried lifestyle of the inhabitants of Nice, and relax among greenery and fountains.

Place Massena in Nice (Massena Square) is a place you cannot afford to miss. Firstly because of its characteristic checkerboard, made of pavement tiles across its entire surface. The second reason is the main shopping street in Nice that leads to it, and the route from the railway station, Avenue Jean Médecin, where the trams go.

Many urban events take place at Place Massena, including the Nice Carnival. From here, you can find roads to the most interesting attractions in the capital of the Côte d’Azur – the Old Town of Nice, the famous Promenade des Anglais, and Castle Hill. Together with the Paillon Promenade going east and west, Place Massena creates a Nice showcase. The more so because in recent years it has undergone a major renovation.

Place Massena is today the central square of Nice, but it was not always so. Before the second half of the nineteenth century, there was a bridge here that connected two smaller squares and Old Nice with the rest of the city, which were separated by the Paillon River. It often flooded the city, so a decision was made to cover over the river. Thanks to this, the Paillon river flows under the city center, and Nice has gained quite a lot of land, which now permanently connects both of its parts. In the Massena Museum you can see numerous pictures and drawings of the city when it was separated by the river. 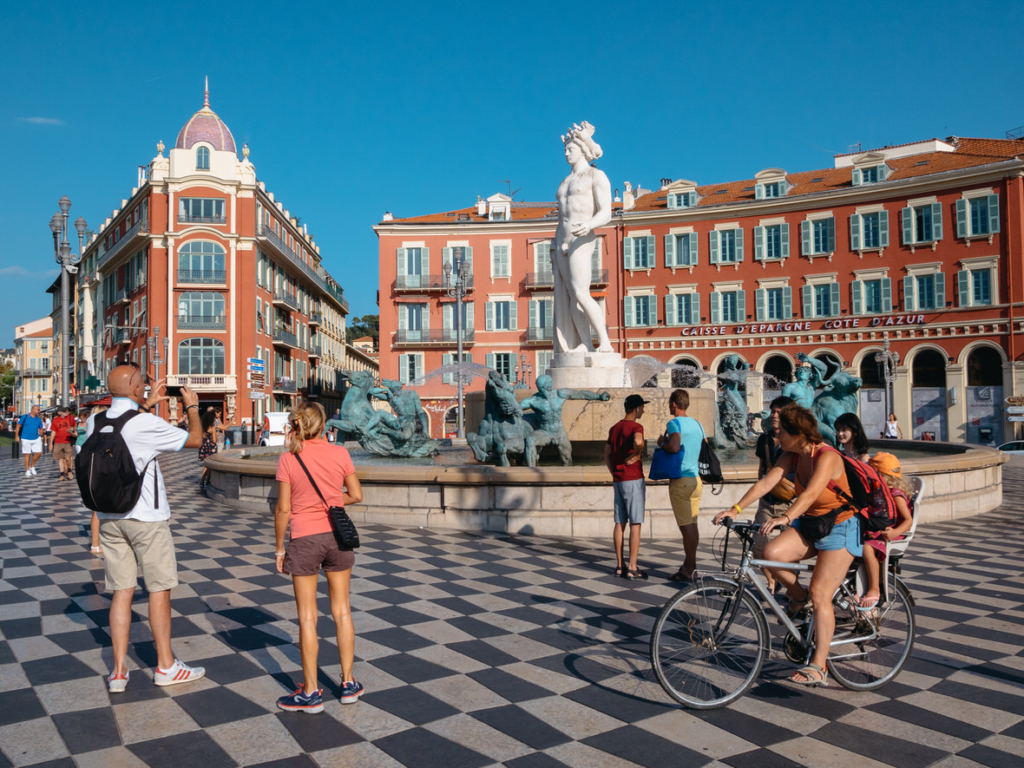 One day in Nice: this is the place to start your trip (Place Massena)

Being in Place Massena, it is worth paying attention to the sculpture and fountain standing in the semi-circular part of the square. This very often photographed object is called the Fountain of the Sun and consists of sculptures symbolizing the planets: Earth, Mars, Venus, Mercury, and Saturn. In the middle there is a huge statue of Apollo – the sun of this system. The author of the whole piece is the French sculptor, Alfred Janniot. It is worth noting that the statue of Apollo is completely naked. Apparently, in 1970, he was removed so that no passers-by would be shocked. Today, however, you can admire the sculpture in its entirety.

The second interesting and intriguing work in Place Massena are the statues set on high poles. There are seven of them, and they symbolize the continents of our planet. The figures are illuminated at night and look impressive. The author of this installation is Jaume Plensa, a Spanish artist. His other work can be admired in nearby Antibes.

Promenade Paillon – here you can rest among greenery

From Massena Square you can go to all points of the compass. In the north you will find the above-mentioned Avenue Jean Médecin shopping street, the Promenade des Anglais in the south, and the Paillon Promenade in the east and west. Under the promenade flows the Paillon river, which a bit further on flows into the sea. Nearby stands a statue of the Greek goddess Nike on her tall column – Nice was named after this goddess. The monument stands on the grounds of the Albert I Garden, which has  been in existence since 1914. Just behind the Nike statue is an amphitheater (Théâtre de Verdure) in which there are numerous concerts in the summer. Among the famous people who performed on the boards of this amphitheater is Édith Piaf. 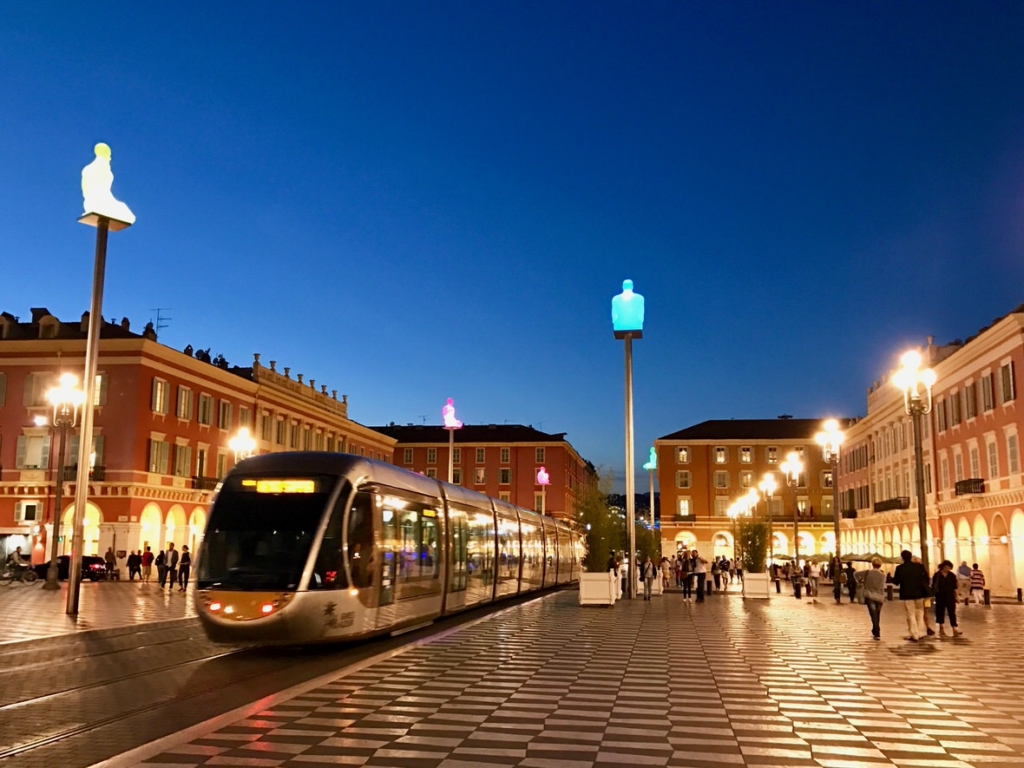 On the other side of Place Massena, going east, you can find perhaps the biggest attraction in the city for children. This fountain was put into use at the end of 2014. It is called the Water Mirror (Miroir d’eau) and in summer it is besieged by youngsters. Walking along the Paillon Promenade you will pass, among others, a monument (from the 19th century) to André Masséna, one of the best Napoleonic generals. You will also pass a large playground for children, which has, for example, a large wooden whale in which you can walk, dolphin-shaped slides, and octopus-shaped swings. There are also many benches and a tidy lawn covers the whole area, where you can lie down and rest. 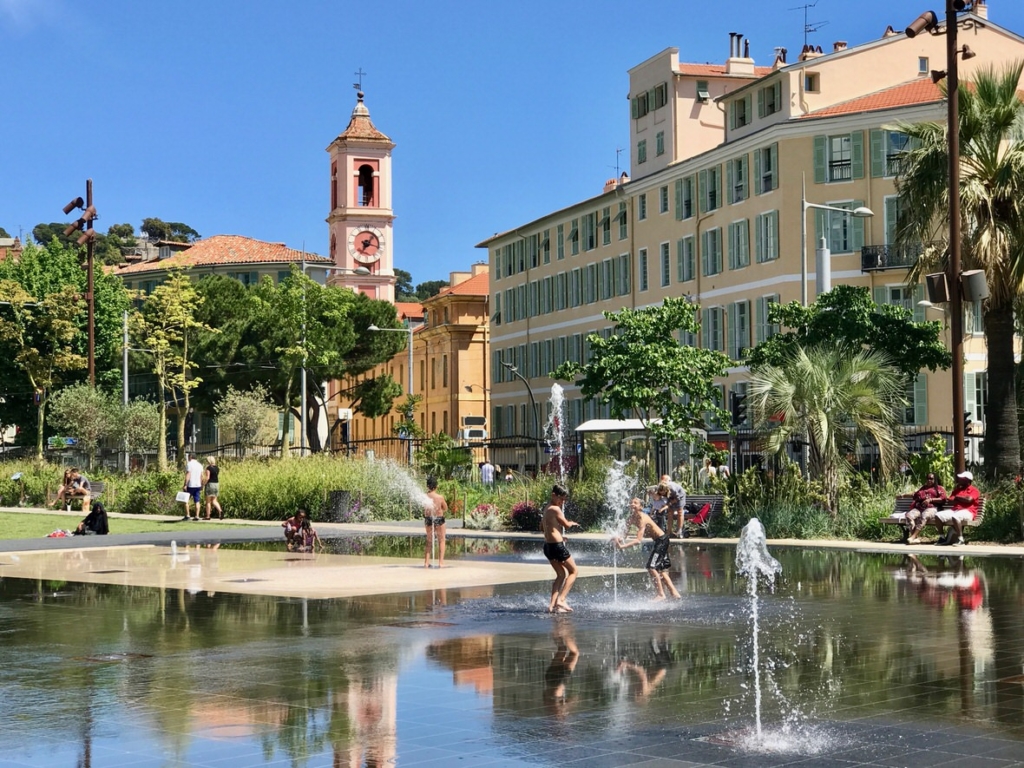 Along the Promenade of Paillon runs the T1 tram line, which goes through Place Massena on battery power, and where, just behind the square, the tracks are arranged among areas of grass. By tram or on foot, going east you will finally reach Garibaldi Square. You will also reach the Promenade des Arts, which ends with an ugly theater building. There are museums (including the Museum of Modern and Contemporary Art – MAMAC) and a conference center.