Gare du Sud is a food hall in Nice. It’s located near the city center and can be reached by tram T1, or on foot. One of the most modern movie theaters in France has been built next to it.

Gare du Sud literally translates to South Station. The name does not refer to the station’s location in Nice, because it lies just north of the Nice Ville main station. It is, instead, connected with the beginning of the railway route from Nice to the mountains towards Digne-les-Bains. Gare du Sud is no longer a station, but the new station for this line stands just behind. From here you can catch the famous Train des Pignes and take the beautiful route through the mountains.

Recommended for you: Nice travel guide

Gare du Sud is now a food hall and it is located in the Liberation district of Nice. Its creation (along with the modern cinema’s next door) has successfully revitalised the area. Just outside the complex is the T1 tram line (Liberation stop), so it’s easy to get here, for example, from Massena Square. The area around Nice Central Station can be reached on foot in just a few minutes. Buses 23 and 37 arrive here from other parts of Nice. 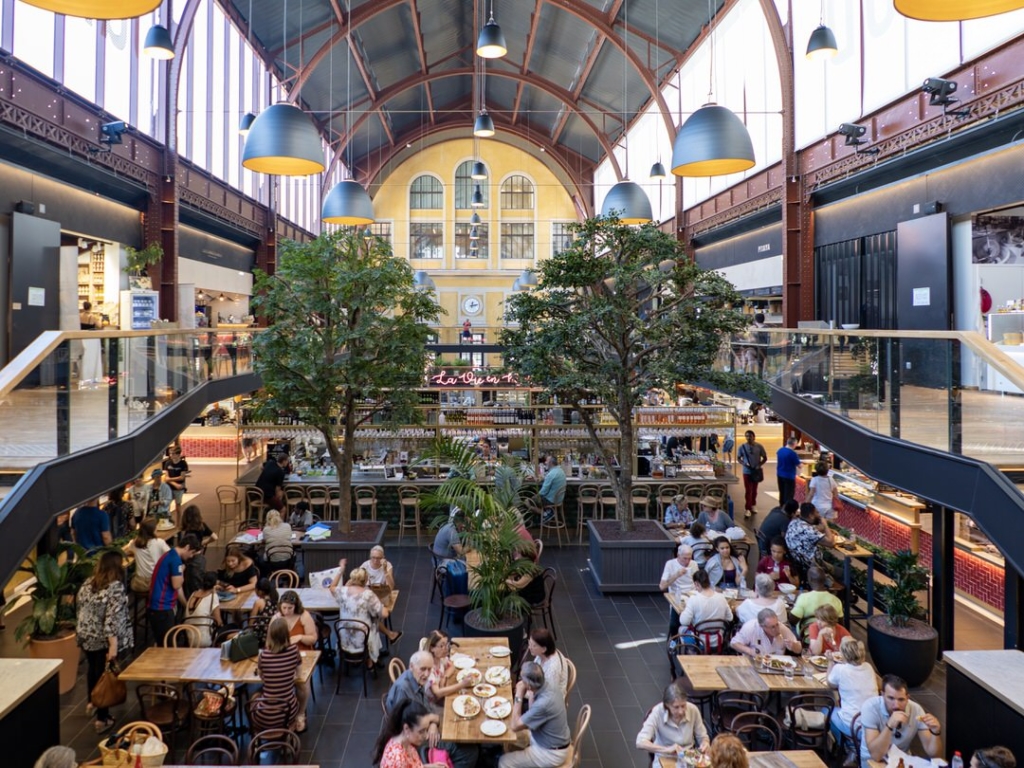 There are over 20 gastronomic points in the hall, as well as small galleries and shops with local products and clothing. There are of course toilets, a large underground car park, and a bar. Except for Mondays, all this is open every day, 11AM–11PM on Tuesday, Wednesday and Sunday, and 11AM–12PM from Thursday to Saturday.

If you would like to eat here, first place an order at your chosen restaurant, and then sit at any table in the hall or its surroundings (also outside). Additional information about the hall is available at lagaredusud.com.

Cinema and “Liberation” market in Nice

Right next to the hall (actually behind it), the aforementioned modern cinema has been built. If you want to watch a movie that has the best sound and picture (Dolby Cinema) while lying on reclining chairs, be sure to choose the screening in room No. 7. Tickets for the films shown in this room are a bit more expensive, but I assure you that quality and comfort are worth it. The cinema is called the Pathé Gare du Sud, and the current program can be found at cinemaspathegaumont.com.

Remember that movies shown in France are usually with French dubbing. This version of the movie will be marked with the letters VF. If you want to watch a movie in the original language version with French subtitles, you need to look for a screening with the description VOST.

This neighborhood provides one more attraction – the Liberation marketplace. It is well stocked, especially with fish and seafood, which are always fresh here. Residents and restaurateurs alike buy here. The market in Nice’s Liberation is not as popular as the Cours Saleya in the city center, but it will certainly gain importance now that the Gare du Sud has been opened.