Tête de Chien (Dog’s Head) is a 550-meter-high rock with a fabulous view of Monaco and the French Riviera. It’s easy to get to there, you just have to remember that it’s just as spectacular as it is dangerous.

I have often written on this blog that a specific place provides the best views of the Cote d’Azur – and it’s always true! It’s just that later I visit another piece of the French Riviera and it turns out that the views are even better. It was no different with Tête de Chien, the huge rock below which lies the Principality of Monaco.

Tête de Chien rises 550 m above sea level and towers over Monaco. You can see it perfectly from anywhere in the principality, as well as from many of the places and towns nearby. Today it is an open area that is relatively easy to get to; in earlier times, however, it served strategic military functions. It was here that Roman troops were stationed after the conquest of Gaul, and where German troops were situated during the occupation in World War II. 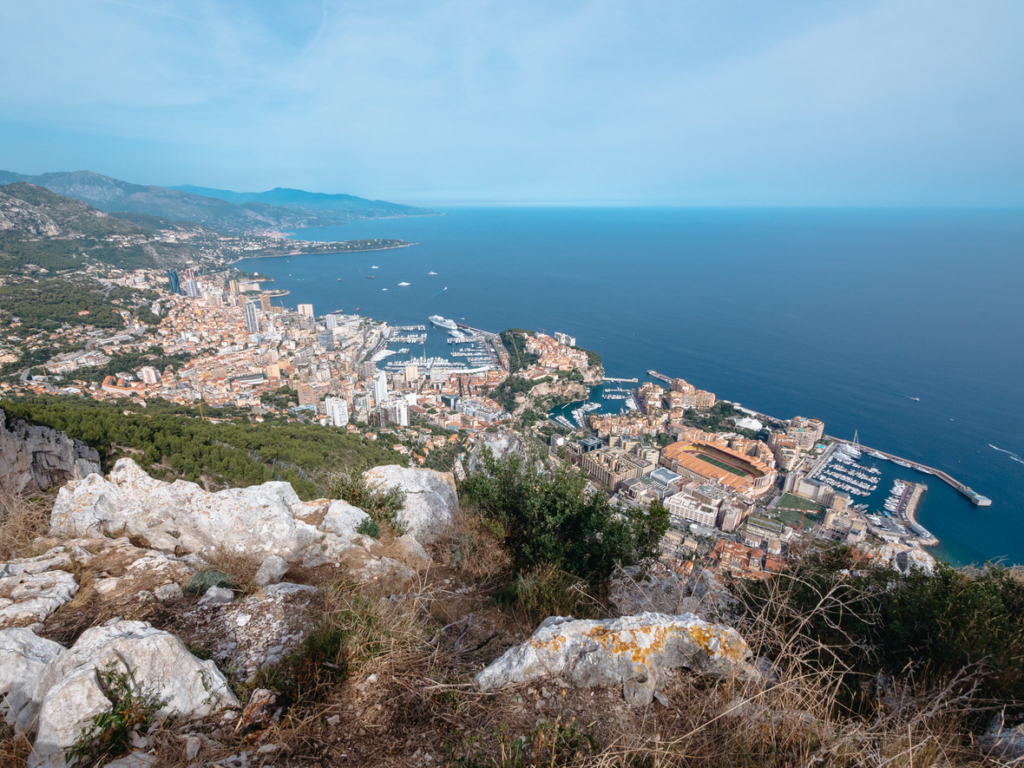 The rock’s name comes from the old Occitan language, “testa de camp”, which had connections with the troops stationed here. In truth, it takes a lot of imagination to see the features of a dog’s head in this huge rock, but the name is certainly catchy.

Fort Massena stands on top of Dog’s Head. This has been a military complex from the end of the 19th century, but it is unavailable to visitors. Currently, it houses an antenna research laboratory, but formerly served to defend the region and was included in the so-called Small Maginot Line.

Of course, from the top of Tête de Chien there’s an amazing view. Looking down you can view a panorama covering the whole of Monaco, while further east you can see the French town of Menton and the border with Italy. On the western side, at the foot of the hill, there is a small seaside town called Cap-d’Ail; you can also see all 3 of the corniche roads to Nice; and even Nice, Antibes, and the hills near Cannes. The view is stunning! However, you must be careful not to let yourself get carried away by your emotions – the rock is very steep and there are no guard rails!

How to get to Tête de Chien

The most convenient way is to use a scooter or car. In the center of the small town of La Turbie, at the intersection, there is a signpost to Tête de Chien.This takes you to the gate of the fort where there is a small, free parking lot. You can also take a bus to La Turbie, then walk the almost 2 km.