The Old Port of Nice is another of Nice’s attractions. Here you will find some nice views as well as a place for a walk, but most importantly of all you will circle Castle Hill. From the port you will also reach Napoleon Bonaparte street and the tenement house where he lived.

The Old Port of Nice is actually called Port Lympia. Once there was a valley here with the same name. The construction of the port was decided in 1748 by the King of Sardinia, Charles Emmanuel III. It is worth visiting this place by descending from Castle Hill in Nice.

The Old Port of Nice, or Port Lympia

The entrance to the port is marked by a long breakwater, which is terminated by a lighthouse. You can get halfway along the breakwater on foot. The port in Nice has various functions today. There are ferries to Corsica and Sardinia, and cruise ships to, among other places, Saint-Tropez. Interestingly, most of the cement produced in France comes from here; it is associated with the production of cement in the Paillon valley (the Paillon river flows through Nice). The port is also, of course, a haven for local fishermen.

In summer, you can use the free boat crossing to the other side of the port. This attraction is called Lou Passagin and is well marked.

Around the port you will find many cafes and restaurants, and next to Castle Hill a whole lot of antique shops. Antique sellers exhibit their goods at the flea market every day (except Mondays, when you can find them at Cours Saleya in the Old Town of Nice).

Walking around the Old Port of Nice

Along the northern bank of the port there is Île de Beauté square (this is also what Corsica is called ), where you can rest in the shade of trees in the summer. At its very center stands the church of Notre-Dame du Port, opened in 1853 – it is a place of prayer for sailors. Not far from here is Rue Bonaparte, which is mentioned in guidebooks as a gay-friendly street in Nice. Napoleon Bonaparte lived in one of the houses on this street from March to December 1794. 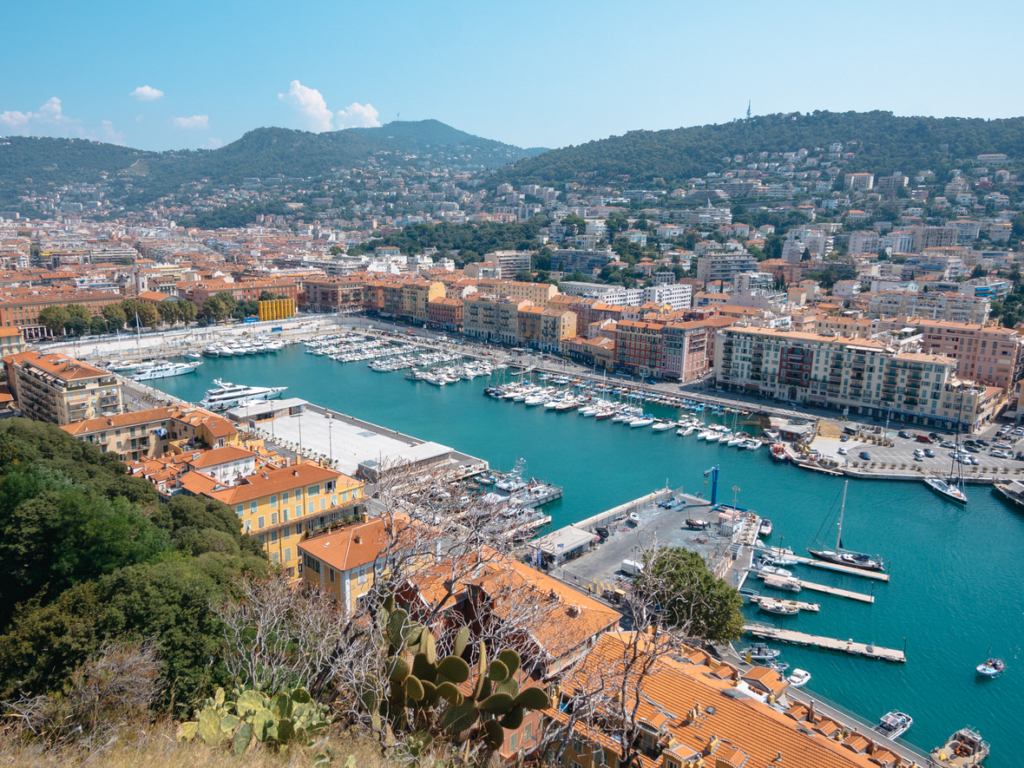 While in the Old Port of Nice it is worth visiting the latest “attraction”. This is a car park, opened in 2015, located on the west side of the port. It is easy to find, even though it is built underground (and under water!), because on the outside it creates a large square, where the biggest yachts are moored. The unusual attraction of this place is the two glazed floors that actually form the ceiling of the car park. This construction is very deep, so only the bravest tourists are able to stand on the windows.

Finishing the trip around the port, it is worth going to Garibaldi Square and so closing the loop around Castle Hill in this way. After, you can enter the Old Town or take the T1 tram to Place Massena or nearby the train station. You can also leave the Old Port directly by tram T2, which leaves from the port towards Nice airport (the journey takes about 26 min).